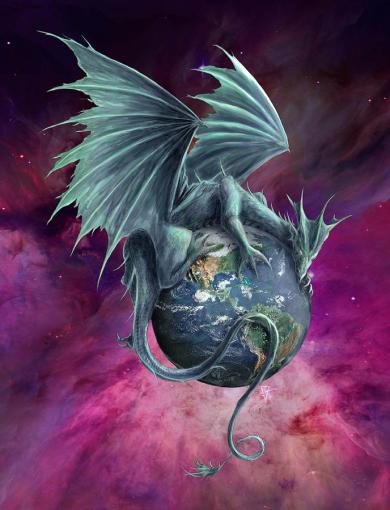 It has been a very busy weekend here at the Dragon’s Nest. The leaf peekers are out in full force, with their tour buses and RVs, which has some of the younger Dragons on edge. And we have delegations of Dragons in from the Willapa Hills, Tonrar Pass, and Porcupine River Weyrs to discuss drought, shrinking glaciers, and the eco-impact of climate change and new oil exploitation on the Enchantments.

The thinning of the cervine herds, not to mention the toxins spoiling the dwindling water, are of obvious concern – and have been since long before Exxon hid its Arctic reports from the 1970s. In the face of Congressional [GOP] denial and inaction, the Weyrs are looking into draconic actions they can take before it is too late.

So, the world is melting and Dragons up and down the West Coast under no-fire restrictions. Time for a little luck of the Luck Dragon.

Happy Falkor Festival! [Note: Falkor’s weekend coincides with the the festival of Felicitas, Pagan tutelary of good fortune. All is connected in the world of Dragons.]

Falkor, as some may recall, is the Luck Dragon in Michael Ende’s The NeverEnding Story. A great furry being with a broad grin and quick laugh, he helps Bastian and Atreyu save Fantastica (Fantasia in the film) from the dread Nothing. Nothing could be luckier than that!

Falkor is more Asian than European in aspect, and more canine than feline – in fact he looks very like a close cousin of Haku the Dragon in Hayao Miyazaki’s Howl’s Moving Castle (though Falkor is quite a few years older).

Around my house, this has caused quite a furor from the cat contingent, who maintain they are getting short shrift. Everyone knows, they insist, that a proper Eastern Dragon is more lion than wolf, and that cats are more magical than dogs. If your felines take up this plaint, just remind them it’s a matter of poetic license. Then let them write their own dragon tale.

Cats and dogs and Falkor’s visage aside, it is fair to say that the company of any Dragon, winged or serpentine, feathered or scaled, brings with it a healthy dose of luck.

We have only to put our trust in them.

A personal post script: I want to send a hearty thank you to the Frost Dragons from Porcupine River. Our fridge died this past week and they were a huge help keeping things cold. Now, if only we can find a way to return the favor in their Arctic lands.