“We are starstuff. We are the Universe made manifest,
trying to figure itself out.”  … Babylon 5

In the beginning there were Dragons. They stirred the Universe with beat of their wings and annealed it with their callid breath. These are the Cosmic Dragons about whom you’ve heard so much. It seems only fitting to kick off the Month of the Dragon by touching on these wondrous beings. To that end, I offer a few words on Cosmic Dragons from my book, The Dragon Keeper’s Handbook.

From time immemorial, Dragons have played decisive roles in cosmologies across six continents. They bound the world together with their scaly coils and drank the waters of the planet dry. They brought the rains, raised the mountains, and blocked out the sun

They aided Creators, were slain by Creators.

And they were themselves Creators.[1]

Tiamat, Aido Hwedo, Degei, Alklha, Vritra, Shen Lung, Quetzalcoatl, Ophion, the Fire Dragon…such elaborate myths, every one – and totally logical given that Dragons are old and large and we are young and very small. But these tales are human, not draconic, illuminating the people who told them rather than the actual Dragons at their core. Still, they serve as steles of remembrance, marking the first Dragon/human encounters and laying the groundwork for how we of the world would ultimately treat our Dragons.

What sparked the veneration of Cosmic Dragons? Curiosity being hardwired somewhere deep in our DNA, we have a need to explain the inexplicable: birth, death, the sun, the moon, mountains, and seas. Or, as Douglas Adams put it, to answer “the Great Question of Life, the Universe, and Everything.”[2] 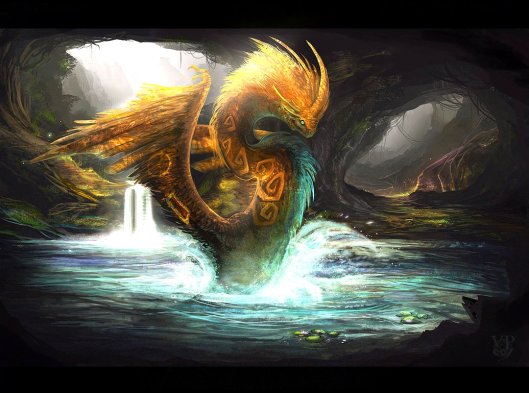 Our early efforts at this monumental undertaking led us to look around and elevate the known to the unknowable. We stomped smooth the dancing ground of the gods, imbuing vast creative – and conversely, destructive – powers in heaven and earth, beasts, birds, and elementals with sacred worth. From whatever was at hand, we fashioned the gods who fashioned our world.

And who could possibly be more deserving of deification than a Dragon?

Of course, these are no ordinary Dragons – if there even is such a thing as an ordinary Dragon. They are larger, fiercer, wiser, more magical than their less-than-divine kin. Manifestations of strength, grace, courage, virtual immortality – all the attributes to which we aspire – they also juggle light and dark, good and evil, within themselves, in an almost human way. In culture after culture, the presence of Cosmic Dragons signifies those places in time and space where all our nascent fear, wonder, and desire run headlong into the transcendent forces of Nature. Wildness and Other, they speak to our need to revere something greater than ourselves.

Today, science provides many of the answers once relegated to the mystical. But the stories, the lure of genesis and our own “once upon a time” through which Cosmic Dragons fly, fascinate us still. They are the true testament of draconic sempiternity. 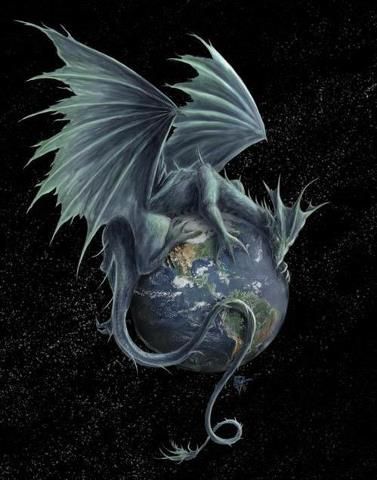 [1] Dragons as Creators likewise bolster the veracity of a draconic manifestation in the world. For reason dictates that if, as Judeo-Christians – and others – hold, God created people in His image, surely the Creator Dragons would have made Dragons in Their image. It keeps Them from being lonely.

[2] Unlike the Magrathean computer, Deep Thought, 42 is not the answer we came up with. Yet.

In the tradition of Month of the Dragon, everyone who leaves a comment here at Dragon’s Nest has their name go into a hat. At the end of the month, a name will be drawn and the winner will receive a signed copies of my books, The Dragon Keeper’s Handbook and Dragons for Beginners (both from Llewellyn Worldwide). Hope everyone is feeling lucky!