Here in the Northern Hemisphere, thermometers are dipping into wintry territory, leaving frost on the pumpkins and reminding us to pay homage to hardy Frost and Snow Dragons around the world.

Native to the high altitudes and lands beyond of the 67th parallels, these cold-weather beauties have adapted to some of the harshest climates on the planet. They battle the elements in deep, Dragonfire-warmed caves, their thick hides and shaggy manes keeping wind and creeping cold at bay. The lack of vegetation means they have an almost exclusively carnivorous 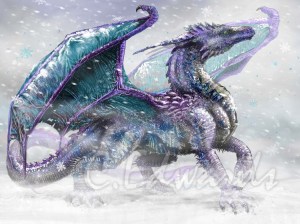 diet, hunting caribou, seal, fish, even migratory fowl (and in the south, penguins). The nutrients most Dragons pick up from greens, Polar Snows or Frosties– as they’re affectionately called – get from sea weeds, vitamin-rich lichens, and indirectly from ingesting herbivores. 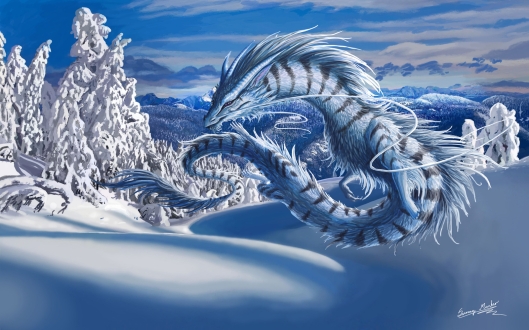 Though Frosties seldom cross paths with humans, our species footprint impacts them more and more with the increase in climate change and the melting of the polar snows. Flight gives them a greater hunting range than the earth-bound predators who share their habitat, but Dragons are not immune to the destruction of their ecosystem. The ever-increasing effects of rampant carbon emissions, pollution, and global warming make accurate Dragon information – numbers, health, etc. – all the more essential. As with other Dragons in other environments, the Polar Snows are great measures of the health of the planet.

We must watch them with care.

8 thoughts on “The Frost is on the Dragon”